Hong Kong was never really on our initial list of countries to visit during this year abroad but since we were in Japan and making our way to Thailand, we figured- why not?! Of course we want to see everywhere and everything so I’m sure we would have gotten there eventually but the Japan visit really made it more of a possibility. I’m so glad we were able to make it happen.

One of the main factors why Hong Kong wasn’t on the original “must-visit” list was because it’s expensive. Kile and I are now surviving off of one income (in addition to our savings account) and Hong Kong isn’t exactly known to be backpacker friendly. Luckily, we started doing some research beforehand and we were able to track down some fairly reasonable hotels and things to do.

The hotel we ended up staying at was mentioned as one of the “most affordable boutique hotels in the world” – it’s called the Mini Hotel. They have 2 locations: Central and Causeway Bay. Randomly – we booked the Causeway Bay location because we really didn’t know better and I’m super glad we ended up booking this location anyway (more on that below.)

We got to our hotel after navigating Hong Kong’s awesome and amazingly easy train/subway system. The hotel’s lobby and hallways were decorated in super cool and retro black and white photos of half and sometimes fully naked celebrities, bright colors and hip light fixtures. When we walked into our room we immediately realized why they call it the “Mini” hotel. The hotel itself was 19 floors but the room? Pretty much a box with a bed. We knew what we were getting into so it was all good. Not to mention they had a promo for “buy 1 get 1 free” so for 4 nights, we actually only paid for two – sweet!

Causeway Bay is a bit further east than Central Hong Kong but it’s only 3 train stops from the main Central subway station. After checking-in we went out to explore. Hong Kong is famously known for it’s massive skyline – in fact, the largest skyline in the world. It’s no joke. It was like five New Yorks crammed onto one island. Walking around Hong Kong, you’re completely dwarfed by it’s incredibly tall buildings and skyscrapers. 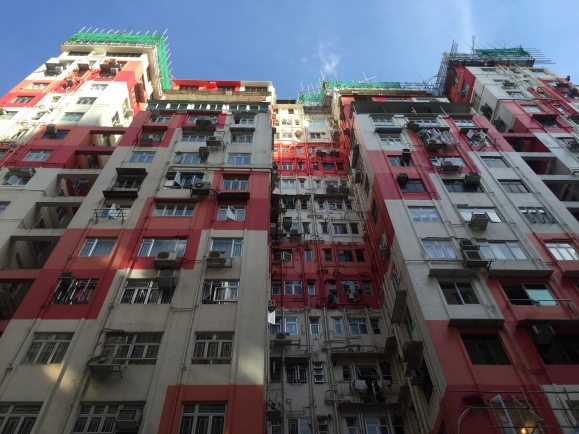 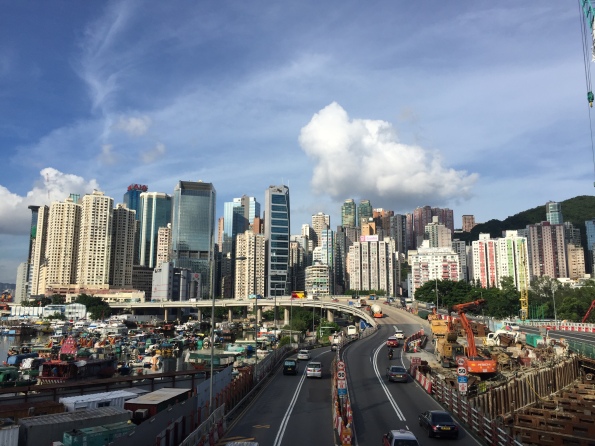 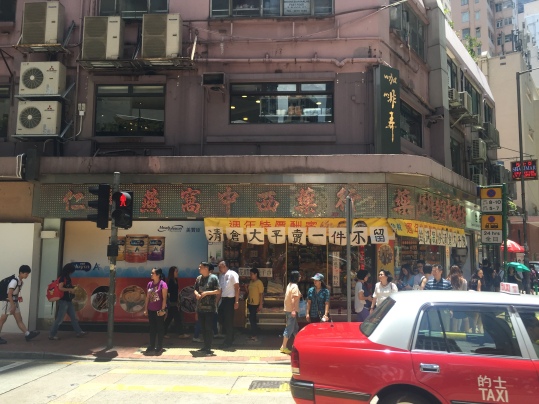 Having just come from Japan, we immediately noticed how chaotic and bustling Hong Kong was comparatively. Japan (the areas we visited) was bustling and busy of course but there always seemed to be an underlying organization to everything. People always tended to walk on the left when you pass and when you entered the train or an elevator – no one talked and people seemed to be very respectful. Hong Kong? Couldn’t have been more opposite. The seas of people walking the street would pass on the left, right or whichever way was quickest. It was loud and frantic pretty much everywhere we went. That sensory overload I mentioned in Tokyo? Hong Kong took it to the next level.

Our first day was spent walking around our neighborhood and getting our feelers out there. Causeway Bay felt very “local” – lots of older buildings mixed in with the new ones, medicine markets and local food. We even discovered a beautiful park right on the waterfront.

Our main mission while in Hong Kong? DIM SUM! The next day we ended up walking to a place nearby our hotel that received some great reviews called Din Tai Fung. We arrived shortly after it opened and it was already fairly busy. It was unlike any dim sum we had in the states – instead of carts being pushed around and grabbing what you want as it passed by, they had a menu that you browse and a sheet that you mark how many orders you’d like.

We ordered noodles, dumplings, green beans, chicken and steam buns. It was absolutely delicious. Some things tasting like the familiar Chinese food and dim sum we’d had before and other things adding an entire new flavor profile to our palettes. It was quite the experience. A bit expensive (ended up spending a total of about $65 USD) but totally worth it.

After stuffing ourselves completely we decided to walk it off and do some more exploring near our hotel. We ended up wandering down to the waterfront and decided to take the very cheap (less than a dollar USD) ferry over to the Kowloon side of Hong Kong. Walking down to the waterfront provided epic views of more of the towering buildings and the ferry ride gave us views of both the Hong Kong and Kowloon side at the same time. It was surreal.

Kowloon was interesting. It seemed to be more of the “gritty” side of Hong Kong. The buildings were still mixed between old and new but had more of a grimey feel to us. There are people hassling you to buy knock off watches and purses and there seemed to be a lot more of an Indian influence. Lots and lots of Indian food places to eat as well.

Along the waterfront on the Kowloon side there were great look out points and it seemed to be the cultural hub with museums, parks and hotels. We enjoyed visiting this part of Hong Kong but were glad we were staying on the island side. 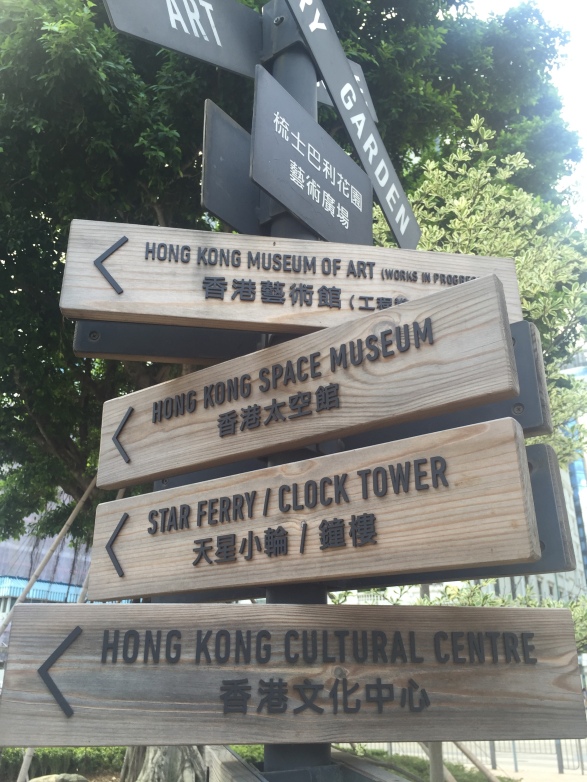 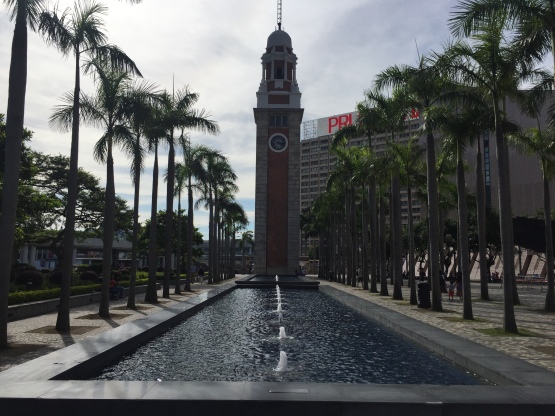 That night we decided to splurge a little and go out on the town. We found a gorgeous rooftop bar at the top of the Excelsior Hotel and timed it so we could watch the sunset. Sitting on top of this building, with wine in hand – we had one of those moments that left us thinking “holy crap…I can’t believe this is our lives right now.” The city’s lights and sounds were truly magical at that moment. Seeing Hong Kong light up at night was something we’ll never forget. We were so happy we decided to make a stop in Hong Kong. 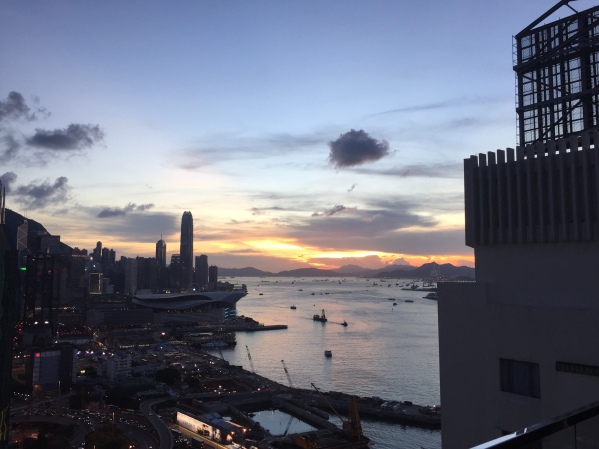 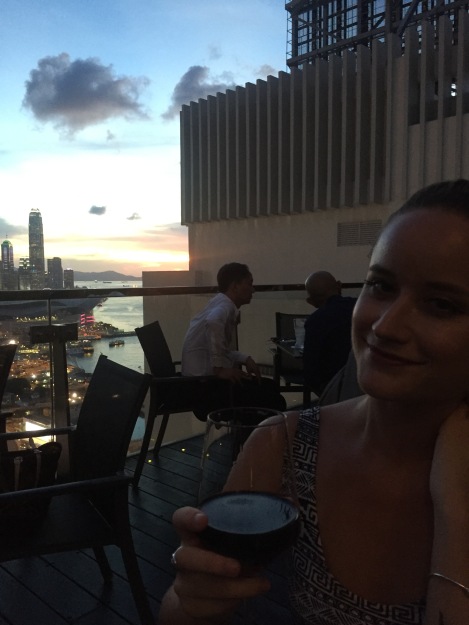 The next day we decided to get back in touch with nature and do a hike. We found a trail that Time Magazine named the Best Urban Hike in Asia – of course we had to try it. But of course in typical Brewer fashion, we ignored the directions of how to get there and decided to find our own way. We quickly realized the reason all the blogs told us to take the subway stop before the one we did and to take a bus to the entrance. The way we decided to go was geographically closer to the trail entrance but in order to get there – we had to walk up close to 700 stairs that go straight up. In 92 degrees and humidity – this was no easy feat. The upside was that the stairs go through an incredibly beautiful cemetery that goes up the hillside. Absolutely gorgeous. 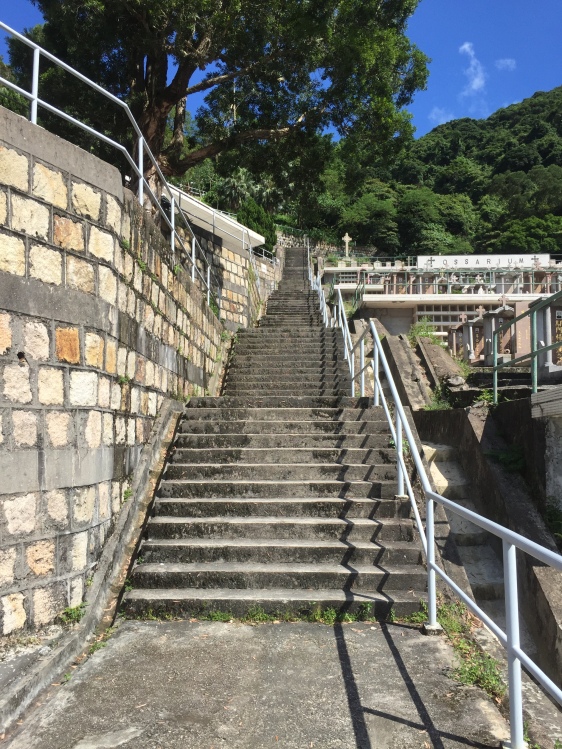 After climbing up what felt like a million stairs we finally reached the actual trailhead. The first thing we saw was a treacherous looking path and a gigantic spider the size of my hand. We had thoughts of turning around and saying “screw this” but since we’d made it that far – we decided to go for it.

Hiking in 92 degrees and a shit ton of humidity is super hard. I don’t think we’ve ever sweat so much in our lives. But once you finish the hike, you’re rewarded with Big Wave Bay. A quaint little village town with an absolutely gorgeous beach. We were super surprised to find that it wasn’t packed with people on such a hot day. We also immediately regretted not bringing our swimsuits. Worth the sweating and the scary spiders though.

Our last full day in Hong Kong we decided to head into Central Hong Kong. As I mentioned before, our hotel had 2 locations – one in Central and one in Causeway Bay. Once we arrived in Central Hong Kong we were so glad we booked our stay in Causeway Bay because Central was very much a business-district. Lots of towering office buildings and very high-end shops (Chanel, Louis Vuitton, etc.)

We found a self-guided walking tour online that looked like it would give us some great insight to “real” Hong Kong. It totally delivered. We explored streets lined with medicine shops – which, in Hong Kong, it’s all eastern medicine. Dried herbs. Dried mushrooms. Dried sea creatures. Dried all creatures really. The way they were all displayed were beautiful. 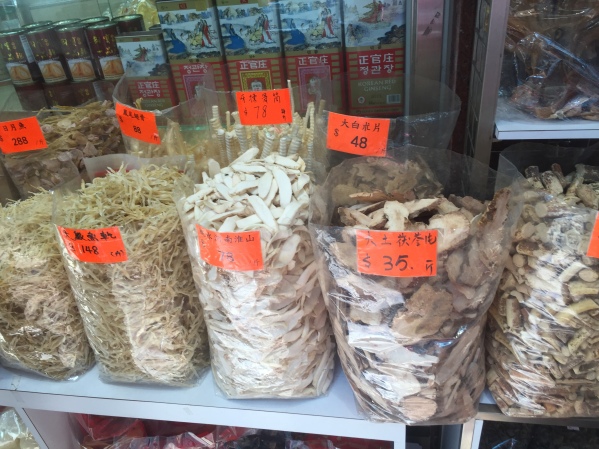 Our last mission was to make our way to the top of Victoria Peak. There are multiple ways up but we decided to play tourist and take the tram to the top. We were crammed into a little trolley and up we went. The angle at which this tram goes up to the peak was insane. Slightly terrifying. If the brakes every failed on that thing – it wouldn’t be pretty.

Once you get to the top you’re rewarded with the most epic and beautiful panoramic view of Hong Kong and Kowloon. You can even walk to the other side of the peak to see the opposite, more nature-centric, side of Hong Kong island. Absolutely breathtaking. 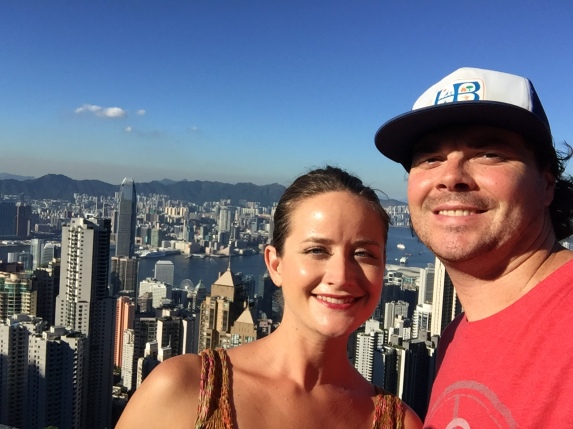 Even though Hong Kong was a bit on the spendier side for us – we are so very glad we took the time to visit. Seeing the sprawling skyline was truly a sight that we will never forget. Absolutely beautiful.

Now we’re off to Thailand for a month! Excited to go back to one of our favorite countries on the planet…stay tuned!