Where the hell does one begin when talking about Bangkok? Bangkok is like the Vegas of Asia. It has pretty much any vice you want – available to you at any time. Except with a lot more grime and grit. And culture. Instead of the streets being lined with casinos – they’re lined with temples. Instead of girls dressed up in tight dresses and high heels – they’re dressed down in baggy backpacker pants and flip flops. And instead of seeing shows – you get massages. But there’s still chaos and debauchery on every corner.

We had had been to Bangkok twice before – 2 and a half years ago. Each visit was only about 2 days long. Turns out, just like Vegas, that’s all you really need. Or can handle. This time we stayed for a week. It was exhausting.

We arrived in Bangkok after a fairly short flight (about 3 and a half hours) from Hong Kong. Our guesthouse (which is much like a cheap motel) was located right off Rambuttri Road which is just across the way from the infamous Khao San Road. After getting settled in – first thing was first – time to go out on the town.

Walking down Khao San Road is one of the wildest experiences anyone can ever have. It’s hard to describe. It’s a small street, with tons of backpackers – eating food, drinking beer, sniffing laughing gas…you know…when in Bangkok, I guess (no we did not partake…I like my brain cells.) The buildings are lit up. The smells are indescribable – a mix between food and sewage. The bars and restaurants that line either side are blasting music. Vendors everywhere are selling cheap tank tops and the stereotypical backpacker wear. Suit shops are trying to sell you your own custom suits on every block. But…at the same time it’s dirty. It’s dingy. It’s amazing.

After a couple beers, great people watching and some conversation – we were walking by an optometrist and thought “hey…we need new glasses…let’s get some!” In Thailand (Bangkok specifically) things are cheap. Like way cheap. Which was a giant relief after being in Japan and Hong Kong. After a couple free eye exams and picking out some new frames. We were set! Two eye exams, two pairs of frames, lenses and even a couple boxes of contact lenses – we were only out $140/USD! 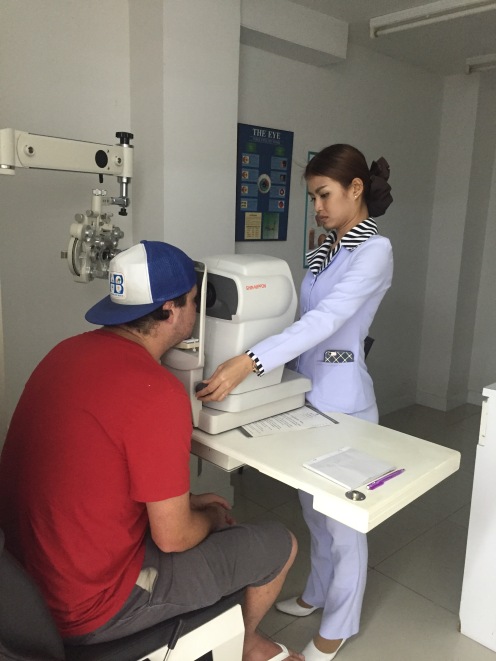 After this it was time for some food. One thing Bangkok has plenty of is cheap food. There’s super yummy chicken kabobs (which is essentially a delicious wrap with chicken, lettuce, carrots and some sauces) and my personal favorite – skewers of meat. Thanks to my dad and my grandmother on my mom’s side – I’m partial to the weird stuff. You know things like chicken livers and hearts. Delish.

Over the next few days we just wandered around the city – exploring the many canals and temples that seem to be on every corner. Bangkok is crazy because there’s so much contrast between the dilapidated buildings and the temples that are so ornately adorned in gold and jewels. It’s such a strange sight to see in person. 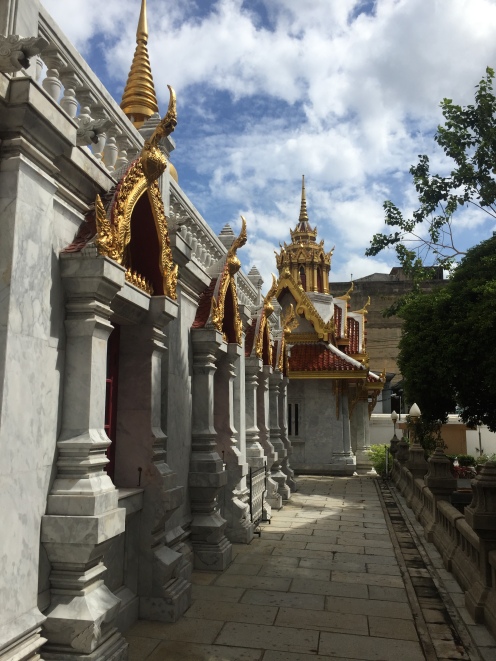 One of our favorite and most beautiful temple visits were to the Royal Palace and especially Wat Pho. Both are located within 30 minutes walking distance from Khao San Road. The Royal Palace was uncomfortably packed with tourists and it was quite expensive to get in – so we opted out. Not to mention I was wearing a dress without sleeves which is a big no-no for temples and holy places.

Wat Pho though – wow. This temple is home to the Reclining Buddha and is by far one of the most majestic, gorgeous and intricately decorated places we’ve ever seen in our lives. There’s just no way our pictures did it justice. The Reclining Buddha was something I’ve always wanted to see. Luckily – they offered robes to throw on if you weren’t adequately dressed. The temple grounds are surrounded by gold Buddhas, exquisite temples and spires and you could even hear the monks chanting during a service that happened to be taking place while we were there. 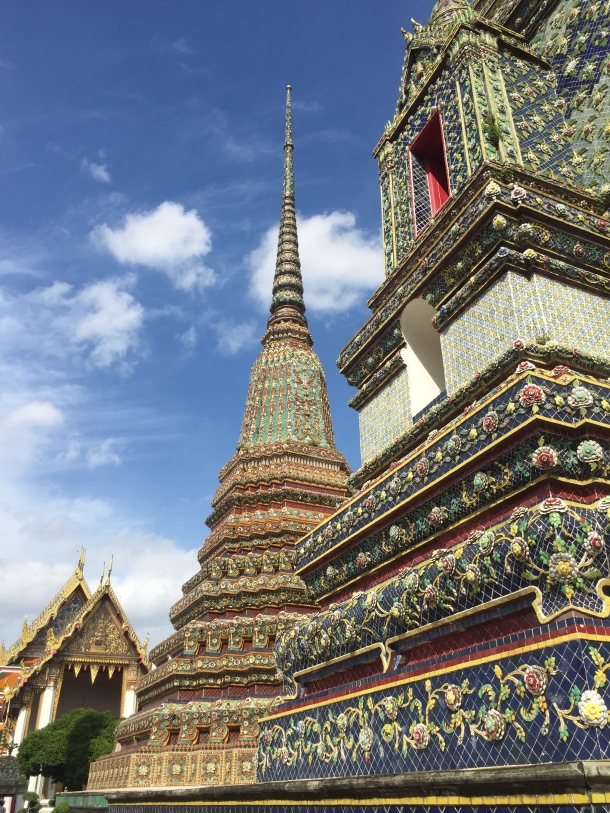 Closing in on our last couple days in Bangkok we were ready to leave. After all the walking, the total blowout of the senses, some stomach issues aka Bangkok Belly, the loud dance music, the pushing your way through drunk young backpackers – we were pretty much over it. We were having fun and saw so many amazing things but…we prefer the more “relaxing” type of traveling. Before we left though – Kile had been in touch with a big fan of his and his band’s. He was a young Thai dude named Kit – well, that’s what he went by anyway.

Kit wanted to hang out and show us around some parts of Bangkok that we probably had never seen before. We took an Uber to meet him on the other side of the city at a cafe called Ageha Cafe that his friend owned. It was adorable. It was a coffee shop/bar/music studio. When we arrived – he was super excited to meet Kile and immediately put on a Kaddisfly album to show his friends that were there as well.

Kit invited us to watch his friend’s band practice in the practice space. We chatted a bit with his friends and enjoyed some good coffee. Then he took us to an Australian steakhouse for a more Westernized dinner. Getting there was quite the feat. Two and a half hours in traffic, 2 trains and a taxi – we finally got there. We talked music some more and parted ways. Super cool experience.

I forgot to mention earlier that our guesthouse during the majority of our stay in Bangkok was cheap (about 500 baht/$14 USD a night.) And of course cheap generally means low quality – it stank of mildew and sewage. The bathroom was atrocious and the bedspread was like a weird gross fleece blanket. We couldn’t stand staying there anymore so we splurged a bit for our last night (a whopping $35/night) and ended up in Chinatown. The view was incredible – there was a rooftop pool and we enjoyed some dim sum once more. 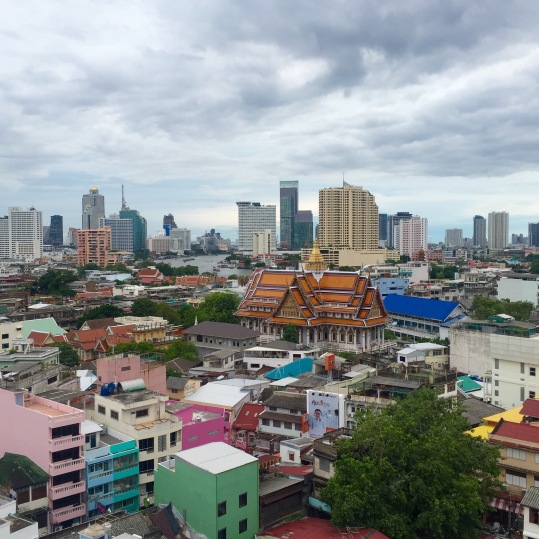 Although we had a blast – we were ready to leave. Bangkok really takes it out of you. You truly couldn’t feel further from “home” when you’re there. It’s a crazy, bizarre and exhausting city. But in case you ever need a new custom suit – you know where to go.

Off to Koh Samui for some relaxing island time!