We’ve been quite boring since we last wrote. The weather was a bit gloomy and rainy. The elections back home had us pretty depressed (don’t even get me started.) And overall – we just weren’t very motivated to do much.

That all changed within the past 4 days.

Back when we began our travels we knew one thing for sure – we wanted to be in Chiang Mai during the month of November for the Yi Peng and Loy Krathong Festivals.

What Are The Yi Peng & Loy Krathong Festivals?

Yi Peng (or Yee Peng) literally translates to “second moon.” It coincides with the full moon of the second month on the old north Lanna kingdom calendar. The festival is known for it’s beautifully illuminated lanterns displayed in houses, temples and most famously – sent into the sky. It is also known as the Festival of Lights. All of which is done to pay homage to Buddha and send well-wishes to family and loved ones. The airport even shuts down all flights due to the lanterns in the sky!

Loy Krathong (or Loi Krathong) coincides with Yi Peng. This literally translates to “to float a basket.” Krathongs, which are decorated baskets made with banana leaves, flowers & other biodegradable adornments, are sent down the river along with candles, incense and Thai treats. On the night of the full moon, people launch their krathongs into the water making wishes and paying respect to the water spirits.

As you can imagine – these simultaneous festivals are an absolutely beautiful sight to behold. There was no way we were going to miss out. The two festivals generally span about 3 days in total.

Night 1 – Lighting Ceremonies Across The City

During the first night of the festivities – the main event was the lantern and candle lighting ceremony at the Three Kings Monument in the Old City. Obviously – we weren’t going to miss this. So we decided to walk ourselves down the 2 miles and check it out!

We haven’t spent much time in the Old City since we’ve been here (outside from our 1st week) so it was nice to make another visit. We even popped into a few temples that we hadn’t seen before – there was definitely an energy within the city that night. A palpable peacefulness.

Then, we arrived at the Three Kings Monument – the lighting ceremony was about to take place. There were lots of people gathering, chanting monks and, of course, tributes and monuments to pay respects to the King.

As the lanterns were being lit – the already beautiful landmark became even more stunning. All of the lanterns, which were lined up perfectly, along with the candles were just tantalizing. Add in the sounds of the monks singing and chanting? It was quite enchanting.

Walking home after the beautiful and peaceful evening we noticed that there were candles and candle displays surrounding the entire Old City. It was like something out of a movie. Such a tranquil feeling.

The second night of the festivities we walked back down to the Old City for the opening ceremonies at the main Tha Phae Gate. It’s an area known for community events in Chiang Mai so it was fitting that the official opening ceremonies took place here.

When we arrived – there was quite the crowd starting to build up. There was a stage set up for performing arts and a giant candle display that spelled out “We Love The King.” Aside from this – there wasn’t much going on so we decided to leave.

As mentioned in earlier posts, I don’t do particularly well with large crowds. Since more and more people were starting to gather here we decided to call it a night. Little did I know – the third night’s celebration was going to be a real test for me. More on that later.

The third night of the festival was basically the “main event.” This is the night that people would be sending the krathongs into the river and the lanterns into the sky. This is what we’ve been waiting for and the entire purpose of our stay in Chiang Mai.

Prior to arriving we had heard that the festivities would be canceled due to the King’s death – however, obviously, this wasn’t the case. The celebrations would continue – just in a smaller scale and without fireworks. Sounded calm and peaceful right? Peaceful? Yes. Calm? Depends on your definition, I suppose.

We were invited to go down to the lantern lighting and floating events with our new friends Amy and Andrew (Our Big Fat Travel Adventure) – all of us were excited to see the city and sky become alive with lights. When we first arrived – the crowds were starting to accumulate…and quickly. The streets were buzzing with cars, pedestrians, food stalls, stalls selling krathongs and lanterns for the light events – it was the definition of sensory overload.

Finally, we made our way to the river where krathongs were beginning to make their way downstream filled with wishes, prayers and good intentions. Standing on the bridge, we watched as the candles floating on banana leaves slowly drifted along. Even with the crowds of people all around – it was a peaceful sight to see.

The four of us made our way to the other side of the river to get a better view of the celebration. We all decided it was our turn to buy our own krathongs and take part in the festivities. Tons of locals are selling their own homemade krathongs – all of which are beautiful and only cost about $1. It was time for us to send some well wishes down the river!

When we reached the bridge – we noticed it had been closed off to traffic…sort of. Even though the bridge was closed and filled with people; scooters and even cars would somehow manage to make their way through. Seems dangerous, right? Yeah..it was.

Looking upwards – it was gorgeous. Lanterns dotting the sky and floating like jellyfish against the dark backdrop. But down below – it was a bit crazy. Tons of people cramming their way onto a bridge while traffic is still trying to scoot by despite the closed sign. My panic began to sink in a bit.

There was one point where we almost reached the other side of the bridge but the amount of people caused for all foot traffic to just stop completely. Poorly handled lanterns were beginning to fly into the crowd with flames coming at people’s heads and lanterns were getting caught in trees; thank goodness it’s been raining the past couple of days and none of us caught fire.

For us – it was by far the most crowded event we have ever been a part of – no question. We were not expecting this given the fact that this was supposed to be a “downplayed” event. I swear it felt like the entire population of Chiang Mai was here and all the tourists. Needless to say – it became a bit stressful so we decided to turn around and use another bridge.

Despite the chaos – you couldn’t help but look up and see hundreds of the floating lanterns in the sky and be in complete awe. It was exactly what we had come here to see and it certainly did not disappoint.

Finally making our way back to the Old City, unscathed, we had some food and decided to explore some more. We made our way back into the center and it was still buzzing with people. We ended up meeting another travel blogging couple, Darren and Shelley (Finding Beyond), thanks to Amy and Andrew. As busy as it was – it was still calm and completely peaceful; a really wonderful feeling. 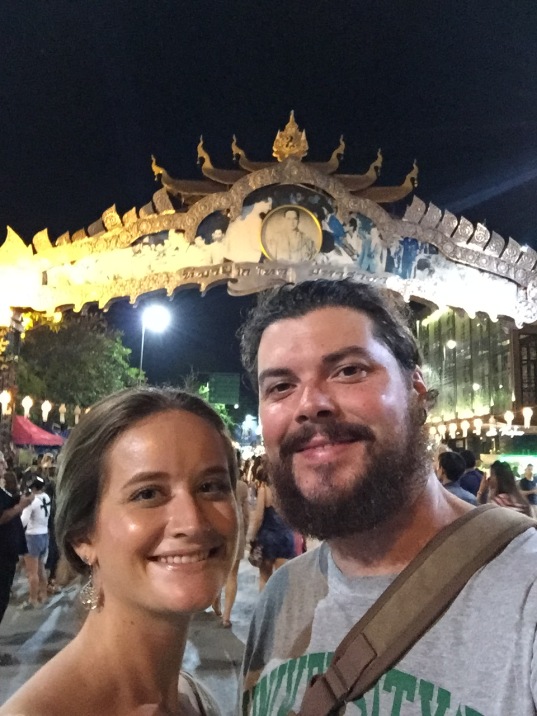 Our final stop for the night before heading home was a temple we had visited during our first week in Chiang Mai. Only this time? It was decorated with hundreds and hundreds of candles. Despite the small crowd visiting the temple – it was extremely quiet and calm. Such a wonderful contrast to the chaos we had just been a part of. 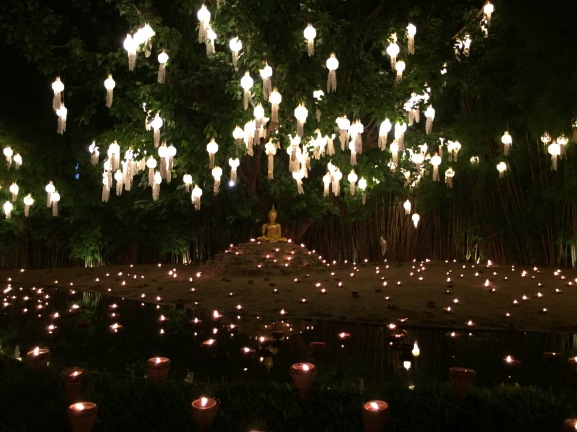 Was It Worth It?

So, after all the months building up Loy Krathong and Yi Peng in our heads – was it worth it to come to Chiang Mai to witness it all in person? Absolutely. Despite the moments of anxiety and claustrophobia – it was amazing. We’re actually glad, in a way, to have been a part of the more “small-scale” version of what it normally would be. To be quite honest, I’m not sure if I would have liked (or could have handled) a bigger crowd with fireworks and more festivities. To us – it was exactly what we wanted. We are so grateful to have participated.

All five senses were in full play during the entire span of the festivals. We feel extremely lucky and honored to have been a part of it all. If you’re ever in Chiang Mai during the month of November – make sure you don’t miss any of what Loy Krathong or Yi Peng have to offer.