We spent (another) two weeks in Hoi An, Vietnam — rang in the New Year and went back to visit our awesome Airbnb hosts (Mike and Hanh) from our previous visit. But honestly? We didn’t do much in those two weeks because the weather was…well…shit.

But we did do one thing — went to a very awesome, super fun, and hilariously crazy Vietnamese wedding. All thanks to an invite from Mike and Hanh.

When the invite was thrown out to us — we. were. PUMPED. We had seen so many Vietnamese weddings being celebrated throughout our time in Vietnam just passing by on the street riding our motorbikes. They always looked like a blast! Over-the-top decorations, giant loud speakers blasting music, and a ton of food. We were very much looking forward to actually attending one. On a personal note, I was very much looking forward to dressing up a bit, doing my hair for once, and throwing some makeup on (which is a rarity these days.)

So the four of us got dolled up and we were off to witness this holy matrimony at the Hoi An Historic Hotel. We were so ecstatic to be tagging along.

Before we left we were given the low-down on how traditional Vietnamese weddings generally operate. First — it’s customary to bring a gift and that gift is the one thing that everyone is always happy to receive — cash. Hanh gave us the proper “wedding gift envelope” to give to the newlywed couple.

Second — we were told to be prepared for a whirlwind of food, drinks, and music. The wedding wouldn’t last more than 2 hours or so.

Third — drink and eat as much as possible because they spent a lot of money on this event and it’s not every day that you get to be treated to such delicious foods and unlimited amounts of beer for free. Well…for 2 hours anyway.

So who was the bride and groom? Well I couldn’t tell you their names but the bride is the daughter of Mike and Hanh’s old boss. Apparently this guy is a pretty big deal in Hoi An so we were told this wedding was going to be top-notch. Yes, please!

The wedding grounds were beautiful and as we arrived all the guests were being ushered into the hall where the wedding/reception would be held. We were greeted by the parents of the bride, took a few pictures, dropped off our envelope into the gift box, and grabbed our seats at one of the dozens of tables set up for the big day. 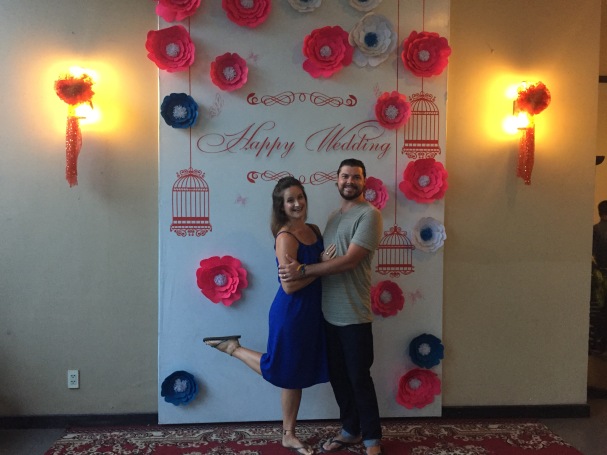 After about a hundred (maybe more) guests were seated — they wasted no time in getting things started. The beers started showing up at our table one after another. The servers constantly filling up everyone’s glasses. Then the speakers started blaring music as some traditional dancers came on stage to perform.

After the dancing — the ceremony began. And it pretty much ended as quickly as it began. The entire ceremony and reading of the vows took less than 10 minutes before they walked off the stage as a newlywed couple. Best ceremony ever. And now? It was time to eat!

Servers started bringing out the food and little did we know — this would be the first of about 6 or 7 courses. All the food was brought out family style and our eclectic table of two Americans, one Brit, and about seven Vietnamese began feasting! Everything was insanely delicious. Honestly — some of the best food we had eaten in Vietnam. Such a treat!

With our bellies full and our minds buzzing full of Heineken — it was time to party. And let me tell you — the Vietnamese know how to party. We had no idea what was coming.

After the food was cleared — the karaoke machine made its grand appearance on stage. Family of the bride and groom and their guests started taking turns singing songs — each one getting a bit more loud and a bit more drunkenly crazy than the last one. All the while, the bride is making her rounds throughout the room to say hello and thank you to everyone. She was probably wondering who the hell these two random white people were at her wedding but she was very gracious nonetheless.

As the beers kept flowing — the liquid courage kept mounting and the singing and dancing continued. More and more people were up on their feet getting their groove on — including us. The men were loosening their ties, the women were getting on stage to dance, and we couldn’t wipe the smiles off of our faces. It was so loud and so much fun. We couldn’t have felt more welcomed.

By the end of the evening pretty much every single person was on stage dancing or singing — again — including us. Confetti was flying, people were smiling, and the positive energy was overflowing. My cheeks were hurting from laughing and smiling so much.

Complete strangers were grabbing us by the hands to join them for a dance — and, of course, we obliged. We felt like we were part of this wonderful, fun, and energetic giant Vietnamese family for just one evening. Such an incredible and unforgettable experience. 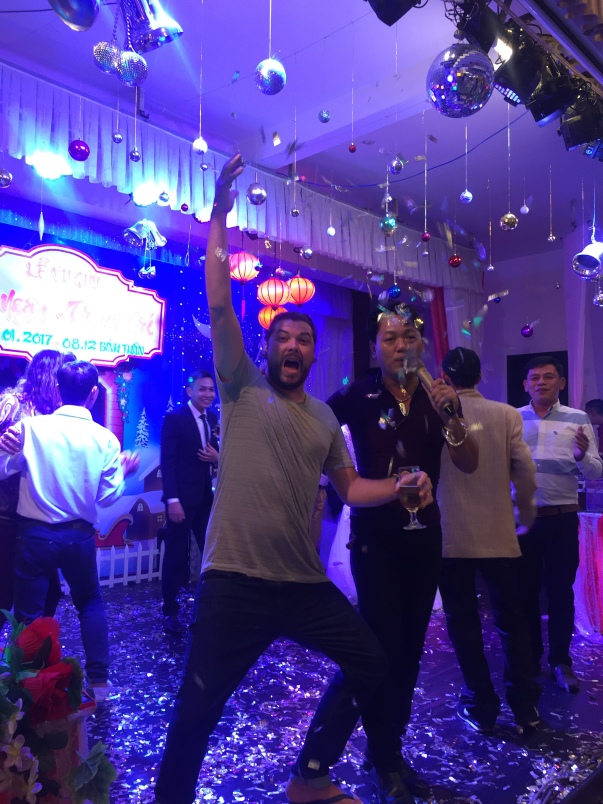 And just like that…it was time to go. We danced our hearts out, ate til we almost burst, drank more Heinekens than anyone ever should in one sitting — and loved every minute. And the best part? It was only 8:30pm by the time the whole thing wrapped up! It was like my dream wedding scenario!

We were so honored to be invited to such an important night in this couple’s life. Even though no one knew us (except Mike and Hanh, of course) — we were welcomed with open arms. Definitely a memory that we’ll never forget.