Although we loved Seminyak right off the bat – we can only take touristy and busy places for so long. After our fix of feeling catered to for a bit, it was time to move on to a place we felt out of our element again. We booked our entire Bali trip before ever arriving so our trips were based on internet research and what we thought would work best for us. We decided, prior to ever arriving, that we wanted to see the small island of Nusa Lembongan.

Nusa Lembongan is about 4km long and about half of that wide (if that.) It’s approximately  12 miles from the main island of Bali. It takes a 25 minute fast boat ride to get there from the port of Sanur. Of course, the boat company we booked with was the most impossibly hard to find place on the port. We walked up and down the main street in Sanur Beach only to find out it was the only unmarked booth about .75 miles down the beach. Typical.

Once arriving on Nusa Lembongan we felt a familiar Caribbean small town vibe that we’d sensed before. The houses and hotels along the beach are small and weathered; the streets are small, narrow and badly paved. It’s a miracle that they squeeze two cars going opposite directions on it at the same time.

Our Airbnb was modest, as always (we rarely spend over $20/night), just a room with a bathroom. But this time our bathroom was partially outdoors so it had a very legit Balinese element to it. I loved it. There was something about showering in the cold-water-only shower with the sun shining on you that felt absolutely magical.

Nusa Lembongan is small and quiet. There’s not much going on and there’s not much to do except chill – which is exactly what we were going for. Beaches to swim at are even hard to come by as it’s much more of a seaweed farming island, however, there’s Mushroom Beach which is the ideal chill out and swim beach on the island. Keep in mind, the entire island takes less than an hour to circle around.

We had 6 nights on the small island and spent only 3 days of it with a scooter to get around. For us, that was really all we needed – everything else was within walking distance. Using our scooter, we explored the famous landmarks like Devil’s Tear and Dream Beach – and also the opposite of the island where we could look out and see Nusa Ceningan (an even smaller island) and have lunch.

We love riding around on scooters in places like this. It feels so freeing. An incredible thing about riding around on a scooter in Bali is not only feeling that fresh Indian Ocean air but also getting whiffs of incense from the daily offerings. It is so comforting and beautiful.

Unfortunately, we did have a minor incident on our scooter. As mentioned earlier, the streets are super super narrow and honestly, I can’t even believe that they allow cars on them. One truck was making a wide turn that forced us off of the road and resulted in my foot smashing against a rock/cement wall. I ended up with a few scratches but it could have been way worse so, even though I was pissed off the rest of the day, it wasn’t too bad.

We had heard about a spot called Sunset Beach (not really a beach at all) that was the “ultimate” spot to watch the sun go down on Nusa Lembongan. The road looked a little sketch so we decided to check it out before sunset one day. We are so glad we did. When we arrived there was just a cove of violent, super blue sea splashing waves against the rock. Something we wouldn’t have seen if we had gone right at sunset. It was breathtaking.

Even though there wasn’t much going on at the beach directly near to our Airbnb, we still loved it. The surf was rough and the swimming wasn’t really possible but you could see some incredible views of the main island of Bali. The volcanoes, the beauty, the green – it was so cool to have a bit of an outside perspective.

During our last full day we walked our way up the mangrove side of the island and found an adorable little village with plenty of warungs with great food and little shops. It almost felt like a different world compared to the rest of Nusa Lembongan, even though we were on such a small island.

Nusa Lembogan is rad. Keep in mind it’s a small island so even the things that are offered on the main island of Bali aren’t offered here. There’s no grocery stores, only small marts – no liquor sold, only in bars – not much going on in general.

We found small warungs that offered delicious and cheap food (couldn’t tell you the name because it didn’t have one.) We loved our very very mellow stay in Lembongan. It gives you plenty of time of to appreciate life and geek out. 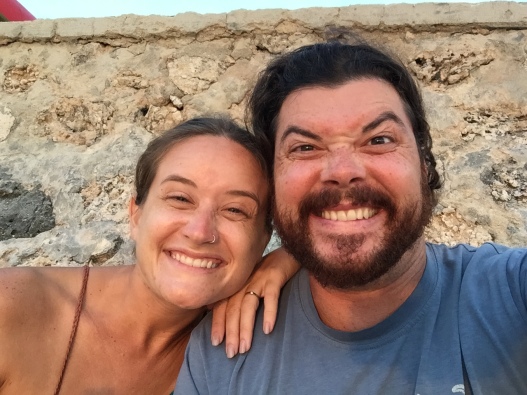