Our flight from Kuala Lumpur to Bali was anticipated for days. We were so excited to get out of Malaysia and into Indonesia. Malaysia was fine. It had it’s highlights but it wasn’t our fave.

For me – travel and transit days are my least favorite thing about exploring the world. I don’t do well with crowds. I can’t stand waiting in lines. Airport security is the absolute bane of my existence. And the actual act of flying? Freakin’ forget about. Every time I get on a plane I feel like it’s the last day of my life and I’m going down. The slightest bit of turbulence makes my chest tighten, my palms sweat and my core temperature soar. I’ve flown Idontknowhowmany times but this fear is something I just can’t shake.

So when you add an intolerable human in the mix who will be sitting next to you for the next 3 hours? Consider it my worst nightmare.

We were flying AirAsia and our seat assignments were as follows – Kile on the aisle, me in the middle, mystery stranger at the window. We boarded before our mystery stranger – so there’s always a bit of hope that you might just be super lucky and get the row to yourself. As people walk by…you’re watching their eyes…seeing if they’re zoning in on your row to give you the polite “I need to get in there” motion. And then I see it…a man has locked his eyes on our row from feet away and I know my dreams of having a row alone are shattered.

The first sign that I wasn’t going to be a fan of this guy was when he stopped at our row and made a hand gesture that said “that’s my seat” but only he happened to be standing in the exact spot we needed to be in order to make that happen. So after squeezing uncomfortably close to his body (I really appreciate a bubble), we made our way into the aisle so he could reach the window seat.

He immediately got comfy. This meant breaking out not one – not two – but three cell phones and  a charging device! What the hell? While traveling I try to keep in mind that “I’m the odd one out” but that just seemed a bit over the top. But then came the scratching. BEWARE: People like my mom and dad who are queezy over certain things are going to be thoroughly grossed out.

The man started scratching his scalp incessantly. Like obsessively. We haven’t even taken off yet and I’m starting to gag. It’s bad enough being in the middle seat, but really? I get the scalp scratching guy too?! I scoot a bit closer to Kile. And then the hacking starts. Coughing every few minutes in bouts that last at least 30 seconds. Oh my god. Again…we haven’t even taken off yet.

So he’s getting situated with his 3 phones and his man purse – in the process he’s elbowing me every few seconds. Please don’t touch me. Thank goodness we’re up in the air. The countdown is on – between the always terrifying take off, the scratching, the coughing and elbowing – I want off this plane ASAP.

As we ascend to cruising altitude – the scratching, the phone checking (3 of them) and the coughing continue. In between all of this he starts biting his nails. Please don’t. And then the shoes come off and crosses his legs. Oh no. I inch closer to Kile. 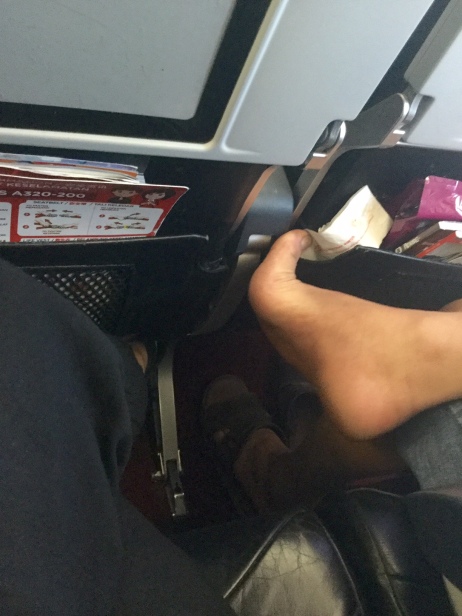 We’re at cruising altitude and the flight attendant comes around passing our customs forms and then the drink/food cart starts coming down the aisle. As soon as Kile brings down his tray and is filling out his form this is when he needs to go to the bathroom (the seat belt sign went off at least 15 minutes ago.) So the tray goes up – we both leave our seats to let him get up and to my absolute mortifying horror – (sorry Mom) – there is skin all over his seat from scratching his head. OH. MY. GOD. I’m going to puke. Shit…we have more than 2 hours with this guy.

He comes back to his seat and the knee movements start up – the kind where it looks like you’re tapping to the beat of some music with your heel but the thing is – he is doing it at a million beats a minute. This man seriously can’t sit still. Elbowing me. Switching phones. Scratching his head. Then scratching his arm. Then coughing up a lung. Then scratching his legs. I am just looking at Kile wishing I had a parachute right about now.

After the food and drinks come and go – he doesn’t seem to notice that the attendants have come by a few times to collect the trash and keeps shoving container, after wrapping, after drink cup into the little pouch in front of him. I felt bad for the man sitting in front of him because I could clearly tell he was feeling this man’s wrath just as much as I was.

But he decides to savor his juice pouch that he has. And savor it he does. He takes sips very loudly with giant wet slurps and makes sure to give a good sigh after each one. After every sloppy loud sip and sigh I would look at Kile and say “That’s got to be the last sip in that juice pouch, right?”

Midway through the 3 hour flight he starts getting even more antsy than he previously was. The 3 phones, the food, the scratching, the hacking – none of this were enough to keep this guy occupied. So what does he do? Starts throwing a series of weird violent punches with his left arm at the air. Is this a stretching technique? What is happening? I’m literally sitting inches away from you. Get me off this plane.

After his personal boxing match with god-knows- what he decides he wants to take a peer out the window. But does he want to look out the window that is clearly his and directly next to him? Oh no no. He wants to look through the window that is most definitely belonging to the row in front of him and takes the liberty to open the light shade of that one – while the man in front of him is moved from his relaxed position leaning against it. What the hell? Meanwhile – leaving his own window shade (literally the only one next to him) completely closed. Shoot me.

Two and a half hours into the flight, after playing videos very audibly for everyone to hear, decides to put on headphones. Oh thank god. Maybe this will calm his mind and he can stop with the coughing and the scratching and the knee bouncing. Only I would be so lucky. Instead? He starts to sing. No fucking joke. Just singing away like he’s not surrounded by at least 5 people within 2 feet of him. I want to die.

Finally the captain announces that we’re beginning our descent. I swear I can feel a sore throat coming on already. But at least I get to leave this man’s presence never to see him again. And within 5 minutes of landing – what does he do? Let’s out a nice giant belch. Jesus.

Peace out dude. The moral of this story is: be aware and respectful of your surroundings and the people that occupy it. This is a plane. Not your home. Or your bathroom. Or your private time.