Ipoh is located almost right in between Penang and Kuala Lumpur – just a short hour and a half train ride from the mainland town from Penang called Butterworth. The train system from Butterworth to Ipoh (ultimately down to Kuala Lumpur and a even a bit more south) is quite new. Kile and I were really impressed with how nice the train was – it was clean, it was fast and efficient but it was F-ing freezing.

Stepping off the train in Ipoh, completely frozen, we were rewarded with that warm Malaysian weather and had to walk less than a mile to our hotel (Le Metrotel.) Right outside the beautiful train station were gorgeous old British colonial style buildings next to a giant mosque. The sounds of Muslim singing were blasting over the speakers for the city.

Our hotel was your standard hotel – bed, bathroom, TV (with the Nat Geo channel in English!), an electric kettle and that’s about it. But it was situated in a really great part of the city that allowed us to walk to Old Town, some hawker stalls, a night market and a giant shopping mall.

Ipoh is a bit more inland – snuggled against some mountains covered in dense jungle. It’s not really known to be a very “happenin'” town, actually known more as a retirement town, but we were welcoming a city of a slower pace after George Town. Before arriving, we did a bit of research and knew that there was a gorgeous cave temple and some cool street art – so that’s what we were looking forward to.

Our first day was spent wandering around and getting the feel of what was near our hotel. I was so happy to find that Ipoh was much more walking-friendly than Penang. Actual sidewalks! Well…at least 50% of the time – which was better than none. The other 50% of the time the walkways were being used as parking spots or tables for restaurants. This little city definitely didn’t really cater to the Western tourist. All menus and signs were in Malay but we started to catch on to some of the more common words for ordering food. We were still getting some stares but not nearly as many as Penang. People would sometimes shout “HELLO!” to us while walking on the street and ask where we were from.

All the street art in Ipoh is most notably in the Old Town district – an area with old British architecture and run down buildings. But then you’d run into a little gem of a street littered with cool art installations or interactive street art. There’s a little alley called Concubine Lane that has adorable trinket shops and ice cream stands. Super cute. We love this stuff! 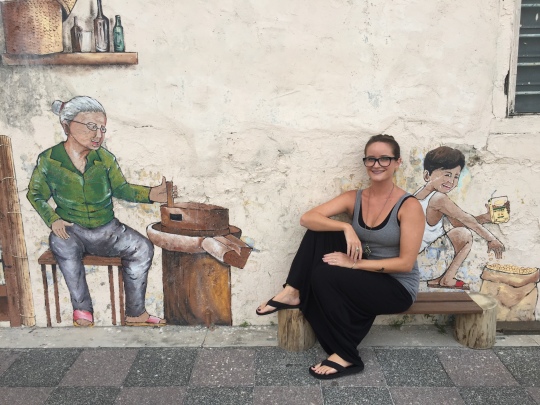 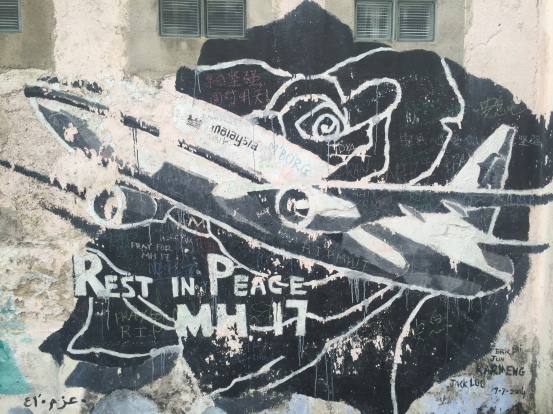 The next full day, our mission was to make our way up to the Kek Look Tong Cave Temple. It’s in an area a bit southeast of town nestled at the base of the mountains. Looking at pictures online – it looked beautiful. But when we got there? We were absolutely blown away. Beauty is a word that just does not do it justice.

The entrance to the cave alone was gorgeous. A huge mouth into the center of the mountain with limestone stalagmites and stalactites everywhere.  Once you walk inside you feel absolutely dwarfed. It’s massive. The cave itself is a Buddhist temple so scattered throughout are gold shrines and statues. It was so peaceful and centering inside the cave – you could very much understand why it was turned into a place of spirituality. 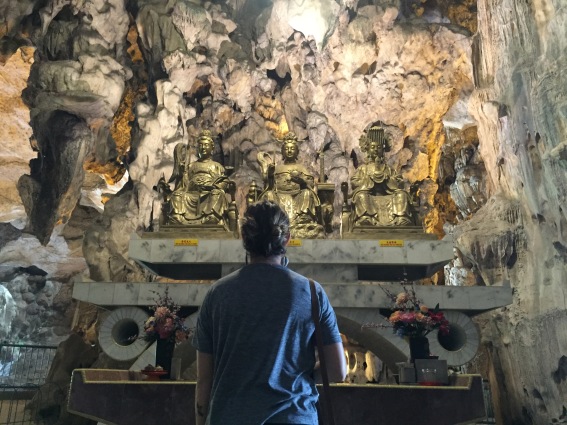 The cave basically doubles as a tunnel as it opens up on the backside of the mountain. On the other side there is a pristine landscaped garden with a little pond and walking path. When we first made it to the entrance to the garden it was blocked off due to some blasting that was going on in the quarry directly behind. We stuck around to hear a giant and deafening blast before they’d let us wander around the garden.

Surprisingly, we had the entire garden to ourselves for about 30 minutes before anyone else arrived. The landscaping was full of prehistoric looking plants and palms. Some of the leaves were as big as my entire body! 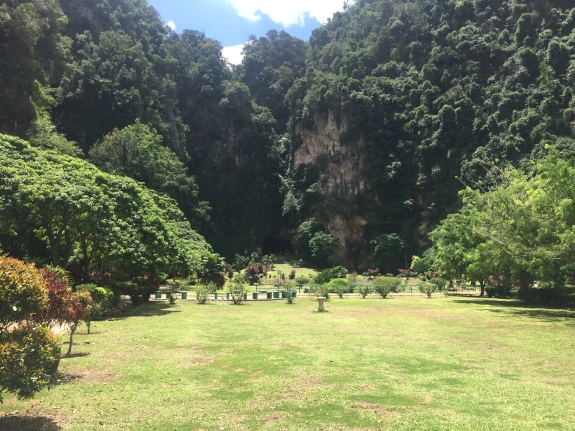 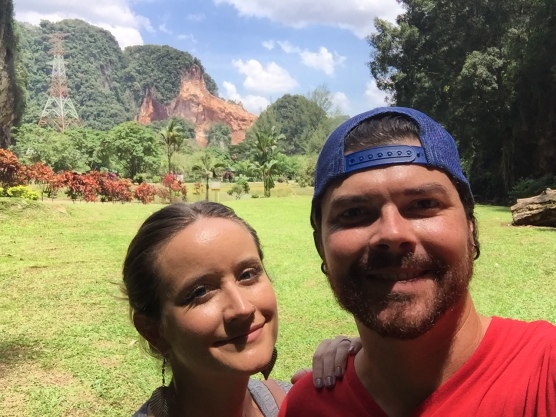 Feeling completely fulfilled we left the cave temple with giant smiles on our faces. We had taken an Uber to the temple but failed to procure a ride back into town. Shit. This wasn’t exactly on a main drag to hail a taxi or hop on a bus. There was a bus stop sign outside but after waiting for half an hour without seeing any sign of a bus we started to consider our options.

As we were standing around, looking thoroughly confused I’m sure, a car pulled up near us. Two dudes, around our age, got out of the car to check out the turtle pond that we were standing near. We asked one of the guys if he knew anything about the bus schedule and he told us that he thought only tour buses come and go from this location. Again…shit. Then he asked us where we were going and we told him we basically just needed to get to the main highway to the Starbucks where we could get some WiFi and request an Uber. He immediately offered to give us a ride. Now. Normally – this would be a big fat “hell no” situation back home. But given our predicament and the fact that he (a local) and his friend (visiting from France) seemed super nice – we took him up on his offer.

We hopped in his much needed air conditioned car and chatted a bit about our stories while he drove us to Starbucks. Ten minutes later? We said goodbyes and parted ways forever. It was one of those moments while traveling that are so truly awesome that we absolutely cherish. We cross paths with such great and random people, never to see them again but forever remembering that moment and being so grateful for them.

Aside from the serendipity – one evening we went up to the mall to see a movie. We opted for The Purge: Election Year because 1.) I love The Purge movies (I know, I know) and 2.) It was in English. We hadn’t given much thought before going to the fact that we were in a Muslim country with a lot of censorship,. Right after the movie started we noticed that they were blanking out all the curse words (with there happened to be a lot.) I immediately thought we wasted our money and there was no way they were even going to show 75% of the content. Surprisingly, they showed most all of the gory violence. So – no cussing but violence is okay? That was confusing. The funny thing is that they missed blanking out a few curse words so the F bomb would drop once or twice but taken out all the other times. And another interesting thing – all the violence was shown except for when it involved a religious leader (like a priest.) Found that curious. It was also a bit uncomfortable watching this movie not in America. Had we been home – it would have been chocked up as a normal “horror” movie. But in Malaysia? It just felt a little uncomfortable with the way our country was portrayed – even though it was just a movie.

Other than exploring the city on foot and the highlight of the cave temple we pretty much just enjoyed the downtime savoring the Nat Geo channel in English – watching terrifying episodes of Locked Up Abroad fully confirming that we’ll never be smuggling drugs during our travels.

Anyway! We loved our time in Ipoh but 4 nights was about all we needed. So next stop? Hopping a train down to the mega-city of Kuala Lumpur!