Oh Koh Samui – we fell in love with this little island the longer we stayed. As mentioned in the previous post – when we first arrived, we were a bit scared due to the seclusion of our apartment and never having driven a scooter bike before. But we caught on quickly and immediately felt like this place could be “home.” We haven’t felt that before in many places we’ve traveled – but Samui? We could definitely see ourselves there for a long period of time.

The best part of where we were staying (Nathon) was that it was on the “local” side of the island. Not a ton (if any) nightlife, traffic is minimal and beaches are close. But at the same time – if you wanted to go to the other, more touristy, side of the island (about 40/45 minutes by scooter) – you could find bars, clubs, busy beaches with beach clubs. Chaweng is the “big” city on the island, if you felt like going out. It was the perfect juxtaposition for us.

Our last couple weeks in Samui were still generally low key. We wandered over to the other side of the island a few times to check out their beaches which were super nice. It was easy to tell why this side of the island is the more developed and touristy side – the beaches were incredibly beautiful. It was a bit scary riding the scooter over on that side due to the increased amount of people and traffic but we survived unscathed!

While driving around the island we passed some pretty cool temples and monuments along the way. They are scattered all about the island but two of them that really stood out were a big Samurai shrine called Guan Yu and a beautiful red temple called Wat Sila Ngu. Absolutely gorgeous.

We also drove to the southern part of the island which is very very mellow with not a lot going on at all. It was incredibly peaceful down on this end and we found a chill lunch spot with long-tail boats outside. They offered to take you to a small island called Koh Tan for snorkeling and hiking. Unfortunately we didn’t go but there’s something about seeing long-tails parked on the shore that makes me so happy. So legitimately Thailand.

Of course we had to eat more food while we were on the island – our favorite past time while traveling. We discovered a pizza place (yes, I know, not Thai at all) in Nathon called Nanus. It. Was. Insane. It’s a family run business (Italian, of course) that is whipping up some delicious and authentic pizzas that were to die for. We ate there 3 times in a week and a half. Our last time – the owner ended up giving us a 10% discount. So very nice.

The last week in Samui we finally decided to venture down to the nightly market near the pier. After our first visit, we were kicking ourselves for not coming down sooner. It’s full of hawker stalls selling cheap Thai food that is really yummy and very authentic. Noodle soups, pork shoulder over rice, Thai desserts – pretty much anything you wanted. And everything was about $1.50 or so. So great! For more great info on delicious food on Koh Samui, check out Ever Asia’s awesome post.

Sadly, our time at our beautiful apartment was coming to an end. Luckily – we had 2 more nights on Samui. We moved up to the northeastern part of the island to a beach called Bangrak. We stayed up here for our last 2 nights because we wanted to see a different part of the island and it was also very close to the airport for our impending departure.

Right as we were getting settled into our new little place – we got a message from our friends/Airbnb hosts in Nathon, Loicq and Sophie, inviting us to the infamous Full Moon Party on Koh Phangan. We’ve heard and read about this giant beach party and knew that it was an experience we couldn’t pass up, so we knew we had to go. Also! Loicq was able to hook us up with free transportation there and back and free admission – sweet!

The Full Moon Party is unlike anything we’d ever done before. Thousands of revelers pile on to the beach of Haadrin on Koh Phangan to drink and dance from sundown to sunrise the next day. Everyone dresses in neon colors, paints themselves in neon paints and immediately become part of one massive gang of friends on a beautiful beach. It was pretty amazing.

Normally these types of events aren’t my thing. I’m not usually big on large crowds or rave type environments but this? This was so much fun. Loicq and Sophie brought 2 other Belgian friends with them that were visiting from Australia and we met up with a friend of theirs from the UK. Everyone was so friendly and so nice – it was like we had all been friends for years. We had an absolute blast.

After dancing for hours and a terrifying speedboat ride back, we had to officially say goodbye to our new friends. But first? A bit about the speedboat ride. Speedboats are the only option to get back to Koh Samui if you want to leave before 7am (which of course we did.) 7am is when the ferries start running again. It costs a bit extra to take the speedboat but we were willing to buck up. So we all board the boat and start putting away from shore. As soon as we were about 300 meters away from the dock – the engine dies, red lights turn on and the alarm starts sounding. We were just sloshing around in the middle of the sea with zero idea as to what’s going on. People start panicking and grabbing for life-jackets. We were all begging the captain to tell us what’s going on but couldn’t get any information out of him. The alarm was still piercing all of our ears as the boat was crashing up and down in the waves. Finally – about 20 minutes later – the alarm goes off and the motor started up again. Thankfully – after a bumpy 20 minute ride – we were safely back on the shore of Koh Samui. Classic Thailand.

We definitely made memories that are going to last a lifetime.

Our last day in Samui was spent recovering from the night before, walking around Bangrak and exploring the local markets. So many fresh veggies, beautiful spices, scary animal parts and super fresh seafood. And stumbling upon kittens along the way! Always a plus! 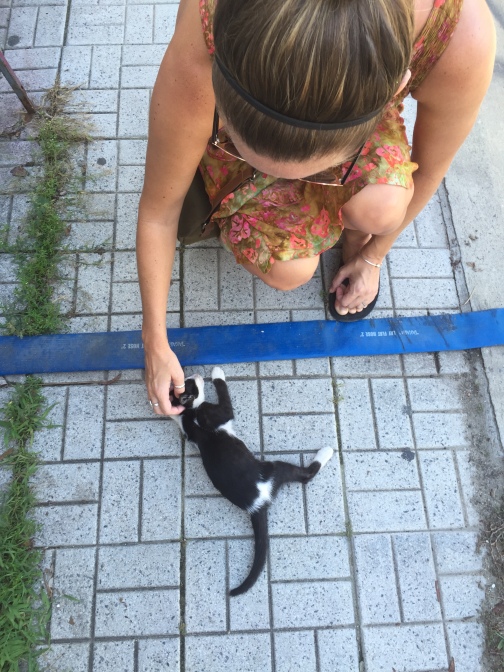 Next stop after poking around in the market was the Big Buddha and Wat Plai Laem. These would be the last tourist spots for us before we were moving on to our next adventure. Both sites were gorgeous and ornate – tediously detailed. Thai temples and shrines are some of the most gorgeous we have ever seen. I did get scolded by a monk about my shoulders showing but luckily they provided robes for the women. 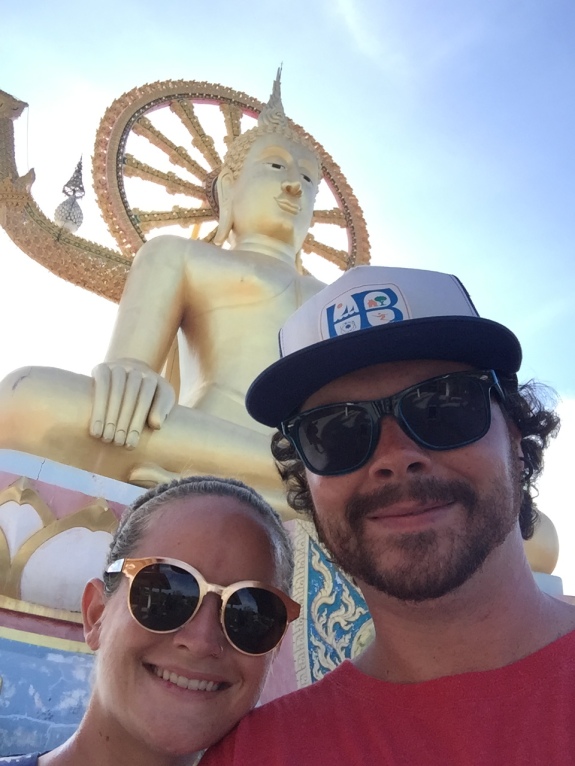 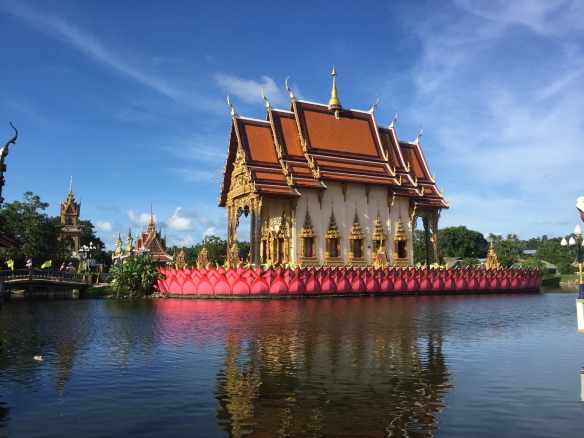 And before we knew it – our 3 weeks in Koh Samui came to a close. It’s funny to think back on our thoughts and feelings when we first arrived because they couldn’t be more opposite now. The fear and uncertainty we so strongly felt is laughable at this point. But that’s why we love traveling. It teaches you to adapt and to work through obstacles and the feeling of being uncomfortable. Everything always seems to work out.

We hope to come back to Koh Samui someday – in fact – I’m positive that we will. It definitely stole a piece of our hearts. But for now? It’s time to explore Malaysia!