The whirlwind of our lives continues! We’ve put some serious mileage on our car the past couple weeks, that’s for sure. Being in California, spending time with family and watching our friends get married seems like a lifetime ago already – it’s crazy how much “stuff” you can cram into such a short amount of time.

After L.A. it was time to head to Vegas! This little hop was great because it’s just a quick 4 hour drive from Los Angeles – the drive certainly isn’t anything to write home about but it’s an easy one which was a nice relief.

We were looking forward to this stop for a couple reasons. For one, it’s been way too long since either one of us had been to Vegas. And for two, we were staying off of Fremont St in downtown Las Vegas this time around which neither one of us had done before, so we were super pumped to get there and live it up for a bit.

Vegas is one of my (and our) favorite cities in the world. There really isn’t any other place like it. You can literally do or have anything you want 24 hours a day, 7 days a week. There’s casinos and gambling at every corner, you can walk the streets with booze in your hand, you can eat anything you want from any price range, and if you want to ride a roller coaster or take a zip line through downtown to just mix it up – you can do that too! It’s a magical place free of judgment and full of the best people watching you could ever imagine.

Downtown Vegas/Fremont street was absolutely the coolest place ever. Having been to Vegas maybe a dozen times in my life or so, I’ve always stayed on the strip, but now? We’ll be staying downtown for any future visits for sure. It was much more our “speed.” The old school casinos and their signage are great, the crowds aren’t as bad as the strip, and the people watching just went to a whole new level. It just felt like a “low-key” version of the Vegas I had previously known – loved it. You can just imagine how awesome it must have been back in the day when Vegas first started up when you’re on Fremont. Plus – you can just hop on their public shuttles that go to the Strip anytime you want. It was pretty great.

We actually utilized that shuttle bus and headed to the Strip for two very important reasons. 1.) We needed to eat the buffet at the Bellagio (BEST.EVER.) 2.) We had to ride the roller coaster at New York New York (my absolute fave.) Both missions were a complete success. A piece of flank stank, some creamed spinach, mashed potatoes, sushi, peeled shrimp and some flan is a normal lunch, right? Surprisingly we kept it all down on the roller coaster ride afterwards.

We didn’t want to leave Vegas but honestly – it’s a city you have to leave – otherwise you’ll end up broke or with some serious liver problems.

After doing all things “Vegas” it was time to get back into some nature – so we headed to Sedona, Arizona to do a night of camping. Everyone we’ve ever talked to that has been to Sedona told us how much we would love it – we were told it was one of the most beautiful places people had ever seen – they couldn’t have been more right.

Our campsite was perfect, just outside of town, and really quiet. It was nice to breathe in some fresh air and decompress from our 2 nights of mayhem in Vegas. After sleeping under the stars, we woke up the next day to do some hiking in these gorgeous red rock formations. Beautiful, breathtaking, gorgeous and unparalleled are all words that just could never do justice for this place. It was unlike any place we had ever been – I’m so glad we made this a stop on our trip.

There was even a moment on our hike where we saw a Native American dude sitting up on top of a rock formation playing the flute – it was echoing off all the rock walls. While this was happening – a hawk flew overhead and let out one of its awesome hawk sounds. I’m not even kidding. Between the flute and the hawk and our surroundings – it felt like we were in a movie. We’ll never forget it.

Just one brief night and one brief day in Sedona – it was time to head to Phoenix. Phoenix was just down the highway a bit which was another great short ride. It was a nice pit stop to see and stay with some old friends. We barbecued, drank some good craft beers, and chatted all night – it’s always so fun to see friends along our travels.

We woke up groggy headed from the night before, packed up once again and got back in the car. This time we were headed to White Sands National Monument near Alamogordo, New Mexico. Unfortunately this was a fairly long drive after such a fun night, but we made it. We rented a room in town and made the quick 15 minute drive to the monument.

When you enter the park, you drive through some dunes that are covered in bushes and some foliage – then all of the sudden you hit a sand road and you’re absolutely surrounded by the whitest sand you’ve ever seen. Miles of perfectly white sand with rolling dunes as far as you could see – it was pretty epic. And the sand is actually all gypsum so it’s super soft. We were imagining how cool it would be if this sand was on a beach somewhere. 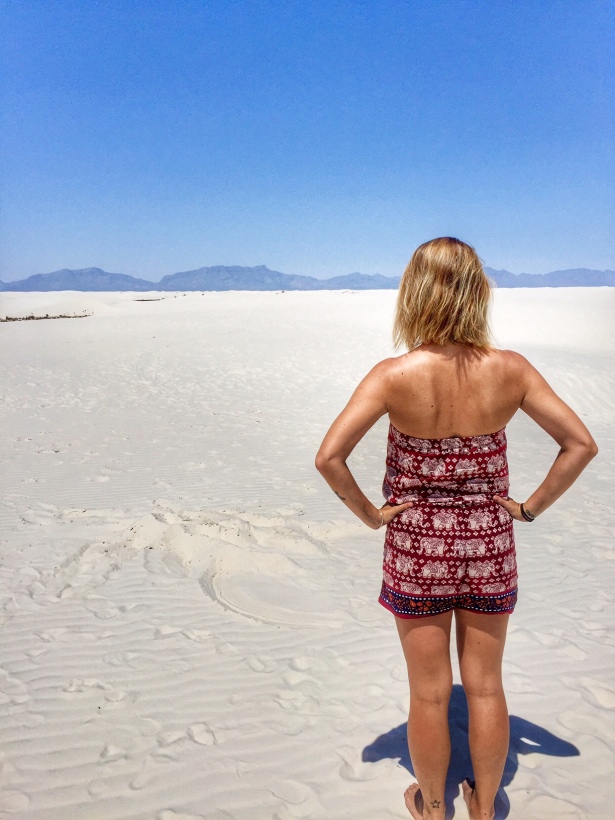 Our next plan was to camp outside of Alamogordo for the next couple nights just to relax and take it easy for a while – but we forgot about one major detail – it was Memorial Day weekend and we didn’t have a camping reservation. Oops. So we decided to deviate from our plans and head up to Roswell, New Mexico instead.

Roswell is a funny little place. It’s a small town but their major claim to fame is the infamous UFO crash landing back in 1947. Supposedly a UFO crashed here and there was a major government conspiracy to cover it all up. The entire town is “alien” or “space” themed. Even the lampposts throughout the town are shaped like alien heads. Naturally, Kile and I had to go to the UFO museum. It was a bit cheesy but also pretty cool – whatever you believe in – you gotta stop here when you’re in Roswell.

Roswell was just a pit stop before we made our way down to Carlsbad to see the Carlsbad Caverns. I had been there once when I was about 12 years old or so – I was excited to go again and actually take it all in this time. Unluckily for us – there was a massive hailstorm that came through and dented my car that I’m about to be selling. But luckily for us – the caverns were totally worth it.

Carlsbad Caverns is another one of those places that pictures just don’t do justice for – there’s just no way. It’s massive, it’s beautiful and you feel like you’re on another planet when you’re in there. The caverns are 750 feet below the surface of the earth – it’s a really trippy feeling to walk throughout the park. Just unreal.

Leaving Carlsbad – we kept heading east. We were on our home stretch heading into Texas on our way to Dallas. We had a few days to kill so we decided to take our time and only do a few hours driving every day and take some time to explore some other Texas cities. Our first Texas stop was Lubbock – a decent sized college town in West Texas.

After being on the road for quite some time now – we were looking forward to some more relaxing so we didn’t do too much in Lubbock – but we did do the necessities. Lubbock is home to Buddy Holly’s (Holley is his birth name) grave site and also home to one of the largest collections/displays of windmills! In pure dorky Brewer fashion – we scoped out both places. Nothing too exciting but glad we saw it.

Even with all that excitement in Lubbock – we had to keep truckin’. A few hundred more miles, another night’s stop in Abilene (nothing to report there), we’re finally in Dallas.

We’ll be here for the next 10 days to spend time with family and get some things settled before we head to Tokyo on June 13th. Until then – you can find us by the pool.